In 2011 the entire tech ecosystem descended toward entropy. Devices and services had a harder time playing together, and simply choosing what to use became an occasion for a flowchart. Some of the simplest tech questions — How should I send a text message to a friend? Which video phone service should I use? — are now hopelessly fraught.

There’s a big opportunity, in 2012 and beyond, for startups that attempt to solve the complexity problem.

Today’s flow of creative expression, riding a tide of billions of instantly accessible digital images and clips, is rapidly becoming so free and recycling so reflexive that it is hard to imagine it being slowed, much less stanched [by copyright law].

via nytimes.com
Forrester Research, die-hard supporters of Windows in the enterprise, finally concedes that Macs help employees be more productive, saying: “Mac users are your HEROes and you should enable them not hinder them.”

“HERO,” it turns out, is a Forrester acronym for Highly Empowered and Resourceful Operatives — “the 17% of information workers who use new technologies and find innovative ways to be more productive and serve customers more effectively.”The report goes on to offer six steps IT departments can take to "ease Macs into their enterprises" and three case studies of companies that have done so successfully."Stand in the way," Forrester concludes, "and you will eventually get run over." 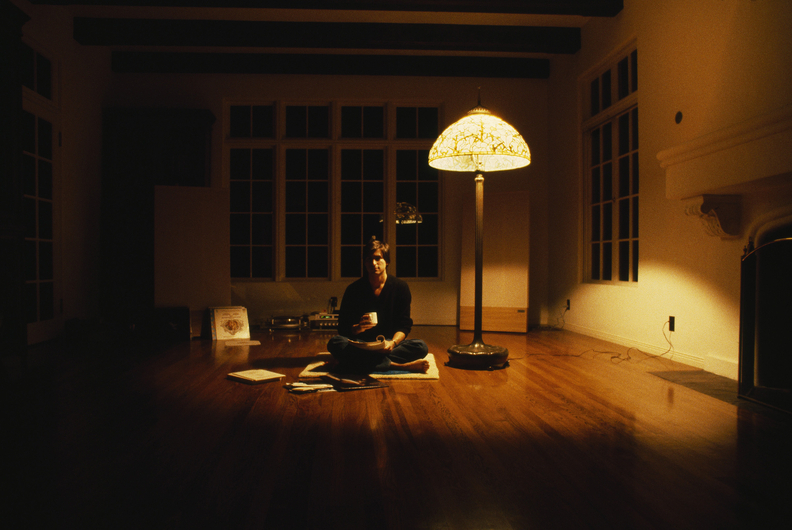 “The problem is I’m older now, I’m 40 years old, and this stuff doesn’t change the world. It really doesn’t. “I’m sorry, it’s true. Having children really changes your view on these things. We’re born, we live for a brief instant, and we die. It’s been happening for a long time.

Technology is not changing it much — if at all. “These technologies can make life easier, can let us touch people we might not otherwise. You may have a child with a birth defect and be able to get in touch with other parents and support groups, get medical information, the latest experimental drugs. These things can profoundly influence life. I’m not downplaying that.

But it’s a disservice to constantly put things in this radical new light — that it’s going to change everything. Things don’t have to change the world to be important.” [Wired, February 1996]

“I think it’s brought the world a lot closer together, and will continue to do that. There are downsides to everything; there are unintended consequences to everything. The most corrosive piece of technology that I’ve ever seen is called television — but then, again, television, at its best, is magnificent.” [Rolling Stone, Dec. 3, 2003]

Wednesday, 17th August, 11:33 AM
@ericasadun Your app page clearly shows it has OneStar, but your app didn't automatically call 911 after my car accident. ONE STAR

Monday, 15th August, 11:23 AM
NYT paywall is porous, but that’s a feature, not a bug. Allows anybody to read any article they like, makes NYT inviting: http://j.mp/qjWDVH

Monday, 15th August, 10:07 AM
To be competitive, Google+Motorola first have to design amazing integrated products, which neither's really done before: http://j.mp/mSFXLa

Sunday, 14th August, 4:59 PM
It's not that PC manufacturers are quitters. It’s that they have the entirely wrong mindset to build must-have products: http://j.mp/pPcj6p

Thursday, 4th August, 2:25 PM
Understanding how users learn can help us design experiences that support the user throughout the entire process: http://j.mp/oDUGly #ux

Tuesday, 2nd August, 1:23 PM
@sugarsock Yes http://t.co/ca7gW24 is a side project to make vid hosting simple. Thanks for checking it out. Let us know what you think.

Tuesday, 2nd August, 1:06 PM
@sugarsock Best luck with the talk. Do you have a little Flip video or Kodak Zi8 to record it? Post it on sugarsock.vive.ly!

Monday, 1st August, 11:54 PM
@sugarsock today mine was 39 days out of warranty. fell on stone, shattered face, they replaced free, in & out under 5 mins, & easy restore

Monday, 1st August, 11:21 PM
@sugarsock I think, to be fair, both Nokia and Samsung make no-profit phones for pay-as-you-go services. But I like Apple's model better!

via twitter.com/terretta
I get asked a lot of small business computer "how to" questions. Today I was asked how to access a Microsoft Access database file over the Internet, if the .mdb file is uploaded to a web hosting provider such as 1&1.
After the "you're doing it wrong" part of the conversation yielded assurances they'd eventually at least upsize to MSDE, I forwarded a few URLs related to getting this bad idea working "as is".
Not sure when this happened, but apparently Microsoft has decided that if you're not going to use the affected OS to browse for help, you aren't going to get to see the full knowledge base support info. 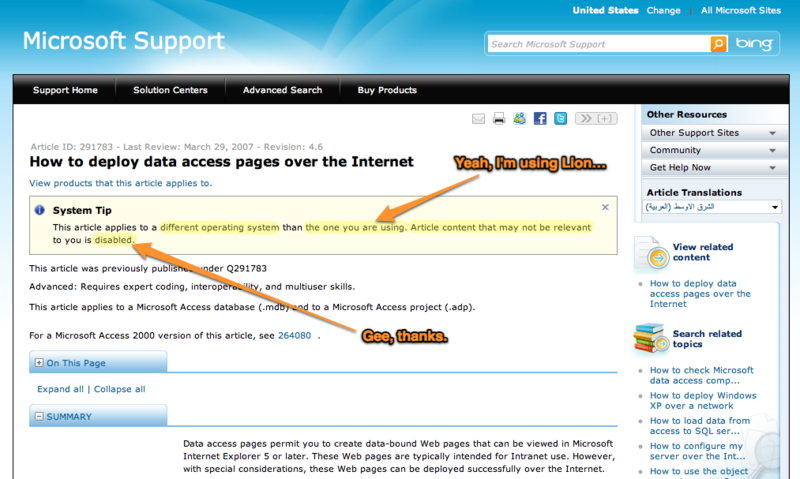 screenshot of http://support.microsoft.com/kb/291783
Here's a System Tip for you, Microsoft: considering the number of IT folks supporting multiple operating systems from their workstation or running multiple OSes on their own machine in VMs, not to mention all the people helping other people, this is especially unhelpful.
I suppose since I can't browse Microsoft's Support KB without running on the OS in question, that settles it... I'm ditching this MacBook Pro and getting a Dell.
(Not really.)

Thursday, 28th July, 3:09 PM
With an LP, I possessed something tangible. When I download from iTunes, I can listen, but I possess nothing I can touch: http://j.mp/pLrhZf

Monday, 25th July, 5:54 PM
Five popular web strategies to get you noticed that don't work, and one that does – be remarkable: http://j.mp/puPv13 #strategy #business

Wednesday, 20th July, 7:49 PM
Tom Anderson, MySpace founder, on whether Google will favor an algorithmic or user-controlled approach to your stream: http://j.mp/qYWDd6

Monday, 18th July, 9:11 PM
The #iPhone Home Button shows how intuitive a single simple action can be if performed in context: http://j.mp/qf9s92 #ui