If you know how to use an iPhone then you know how to use an iPad. I would not agree with some who say the iPad is *just* a "big iPhone".  In fact I see the iPad as the beginning of the end of a lot of things as we know them today. It will not immediately replace laptops, netbooks, magazines, Kindles, and televisions -- not immediately. Over time, however, it is easy to see how the world will change. When we introduced the ThinkPad in 1992 it seemed like a huge deal just to get everyone at IBM to agree with the name. No one, certainly not me as VP of marketing at the time, had any idea that more than 30 million ThinkPads would be sold. The iPad will surely sell multiple times that number but more important the iPad will change the model of personal computing -- not immediately and not for everyone, but for many millions of people the PC will begin to look like a dinosaur.

read the rest at patrickweb.com

John Patrick was VP of Internet Technology at IBM before retiring and was VP of marketing for the introduction of the ThinkPad in 1992. He sees the iPad as becoming “so pervasive in our lives that even though it is a very powerful computer, it will not be thought of as a computer."

Patrick suggests the iPad “is at the crossroads between technology and the arts.”

I've used a friends' iPad for a few hours. Even formerly staunch naysayers who browsed with it came to the same conclusion I did—this experience is the way to read a newspaper or magazine “online”. At the same time, it's sufficiently typable to make the netbook form factor obsolete.

My own reaction to handling the iPad startled me. While I'd speculated about it before, I didn't expect the experience to be so pointed. I'll explain later this week after interacting with it more, if I feel the same after the newness wears off. 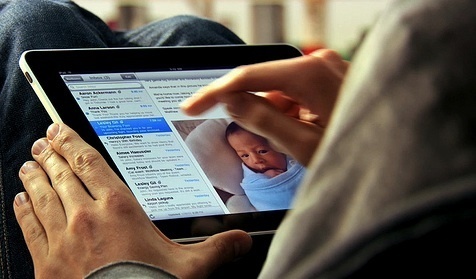