Now YouTube's prompting you to supply a real name to go with that that account.

They justify this by suggesting your username is hard to read, though in my case it's a dictionary word.  They go on to tout "start using the name people know you by", as though that's what everyone with a not-so-high-minded list of YouTube favorites is just itching to do.

For now, this is optional.  That's good. But YouTube doesn't like that answer much, as shown by the next screen: 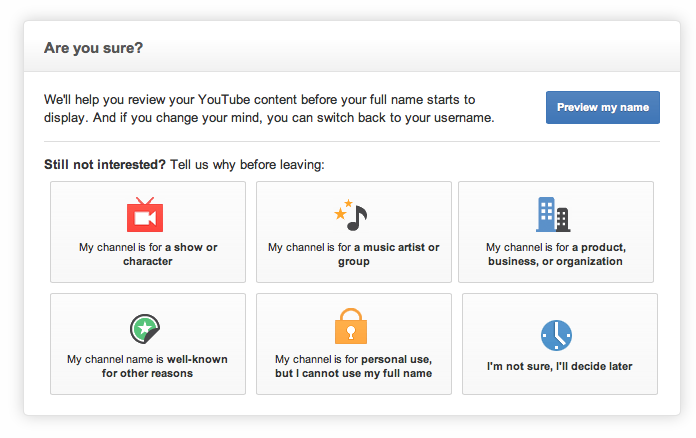 Tellingly, "I like my viewing habits and preferences to stay unattached to my real name" is not one of the six reasons you're allowed to express.  The closest option, "personal use", has the unsettling choice of "I cannot use my full name" rather than the perfectly reasonable "I'd rather not".
It makes sense for Google's business model to train users that privacy is overrated.  But it's a step in the wrong direction for users' online privacy.
There are already far fewer widely used "online ID" issuers than there are driver's license issuers, and tying these IDs together into essentially just Facebook, Yahoo, Google, and Microsoft is fantastic for advertising, but not so great for people who don't want every click to get recorded in an open book.